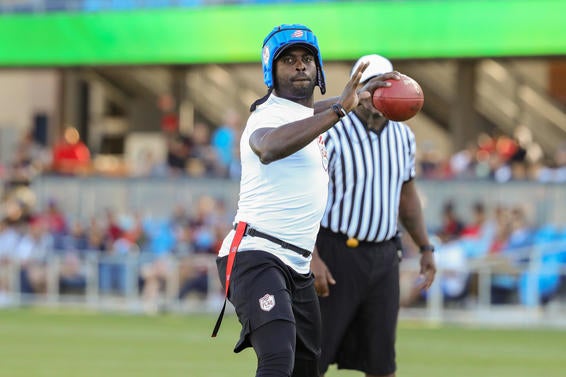 When former hedge fund manager Jeff Lewis launched his American Flag Football League over the summer, he helped a number of former NFL veterans, from Michael Vick and Justin Forsett to Jimmy Clausen and Terrell Owens, find new life on the gridiron.

Now, as the upstart AFFL prepares for an expanded debut — a grand opening of sorts — in 2018, it will attempt to bridge the gap between the big names of recent NFL history and, well, everyone else.

The league announced this week that it will host a US Open of Football with more than $2 million in game prizes. The league is preparing for a 1,024-team tournament that will ultimately pit “America’s Champion,” or the best of registered amateur squads, against one of four professional clubs.

Three of those four pro teams, the AFFL told CBSSports.com, will be individually captained by Vick, the former Pro Bowl quarterback of Atlanta Falcons and Philadelphia Eagles fame; former Cincinnati Bengals wide receiver Chad “Ochocinco” Johnson, who starred in the league’s trial-run debut in June; and Hall of Fame running back Marshall Faulk, who last played with the St. Louis Rams in 2005.

Former NBA player and three-time slam dunk champion Nate Robinson is also tabbed as a professional player, while former NFL QB and ESPN analyst Trent Dilfer is expected to serve as an adviser to the AFFL for the 2018 season, which kicks off on March 23 with regional competition. Ex-Jacksonville Jaguars safety and current NFL Players Association executive Donovin Darius is also among the league’s advisers.

With $99 per-player registration now open on the league’s website, Lewis and Co. will oversee seven-on-seven, single-elimination play all the way through next summer, when four different regions made up of 256 different teams will be whittled down to an unofficial Elite Eight — four amateur finalists and four professional teams, the best of whom will square off for a $1 million grand prize on July 19.

“I can tell you the NFL guys think there’s no doubt they’re going to win,” Lewis said. “But I just don’t know. This is like an ‘American Idol’ of flag football, showcasing people you’ve never heard of. Somehow the regular process didn’t find them, but we will.”

Regional qualifiers for the tournament are set to be held in Arizona, California, Florida, Texas and Virginia, where Lewis said the AFFL will host “three or four NFL seasons worth of games in about five weeks.” The flag teams, meanwhile, can feature as many as 12 players, the AFFL’s official rule book states, and “any player on a losing team can be picked up as a free agent as long as he/she did not play the acquiring team” along the way.

With an emphasis on speed over contact and a flair for the intimacy of featuring helmet-less players — Lewis recited with wonder a trip to a recent Cleveland Cavaliers game, where he called LeBron James “a character in a drama” that goes “beyond the sport” — the AFFL drew nearly a million YouTube views for its June 2017 launch game. It featured Bob Papa, Antonio Pierce and former NFL QB Jeff Garcia in broadcasting roles, while Vick, Johnson and Terrell Owens were among players featured in the contest at San Jose’s Avaya Stadium.