The rebirth of the XFL is one step closer to becoming a reality. The only thing missing from the organization is the players who will be competing. In the above video, XFL Commissioner Oliver Luck and Doug Whaley announced a tryout system known as the Summer Showcase.

Players with professional experience from various leagues will get a chance to showcase their skills when the XFL goes live. That includes 7-on-7 work. This will be invite-only, as there are no open tryouts. Players invited will vary from NFL, CFL and college players. The combine will take place on the following dates in the following XFL cities: 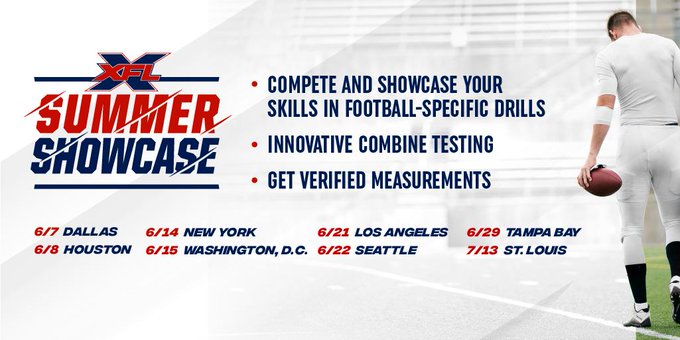 387 people are talking about this

There is an open application for college players interested, with paperwork to be filled on the XFL website. Once approved, those athletes may be able to attend the showcases and participate in all activities. Some of those activities include one-on-one’s with former NFL players, a 40-yard-dash, three-cone drill and a broad jump. The players testing results will be shared through the XFL and NFL, and, as the website disclaimer says, the tryout will not affect college eligibility.

The XFL’s first season since 2001 is expected to start just a few days after the Super Bowl in 2020. The games will be aired on multiple Disney and FOX stations.